Before we start, I’m not really the braggy type. I just know there’s a lot of vague, bullshit ads out there telling you, you can get rich from Facebook and I wanted to stand out because I don’t talk about it. I AM about it. In 2016 alone, I spent $256,000 and some change on Facebook ads. This was my personal money and not some shit I managed for a client either.

What you’re about to get from me is real talk.

Over the last three years, I’ve hired no less than four Facebook experts to run my ads. Not a single one of them has gotten the results I have. I’m not knocking these people, I’m just saying I got this FB ads game figured out. No one has been able to get the reach, click costs or any other metrics, to the levels I take them. I’m about to tell you how I do it.

Also, I want you to know that I’m not doing targeted list segmentation or using any kind of fancy software that requires some type of Ivy League education to operate. I’ve turned a quarter million in FB ads to over two million dollars keeping it simple.

Here’s what I know. My process is simple, easy and highly effective. Which means you will have a high probability of not doing anything you’re about to read here. Smart people, like the people who read this blog, tend to knock simple shit and think surely it’s more complicated than that. I promise you it isn’t.

My first time running Facebook ads was in the beginning of 2013. My buddy, AJ Roberts helped me run my first ad. It was a simple video with a Wufoo link for people to fill out if they wanted to learn more. That simple, 4-step funnel generated over $50,000 in three weeks with just $2,500 in ad spend.

It was at that point I decided I loved FB ads just like a junkie loves heroin.

After continuing to run ads and profit from them, I reached out to Josh Flagg from Million Dollar Listing LA. My (then) partner and I worked out a deal with Josh to host a Million Dollar Mastermind. It was a success. Josh, the partner and I made a few dollars after it was all said and done.

After my time with Josh ended, the partner reached out to Fredrik Eklund and we did the same thing, only WAAAY bigger and faster. It was the first time I had hit a 6-figure return from FB ads. This was in 2013, the year BEFORE MDL NY was nominated for an Emmy. During the time I ran those ads, they went from last place on Bravo to first. I contributed to the awareness of the show.

The Million Dollar Program was working great but it was up to the celebrity to keep it going. I was literally at the mercy of the celebrity and you know how finicky they can be, especially when they are busy making millions of dollars in real estate sales. I had to turn over my ownership in the company to the partner and set off on a trail of my own. This was in 2015.

I then started running FB ads to my blog HardcoreCloser.com and it began gaining in popularity. When we have an ad blitz going on, the site will get a half a million visits in a month. The fan page on FB has 149,000 fans and the IG fan page has 25,000 followers. So, I’ve done the experiments to gain the experience and become the expert.

It all starts with three equally important parts. Each of these parts can’t be overlooked. If you leave one out or don’t finish one, your entire ad/funnel/system will not work. I’ve seen so many people fail at running ads because they don’t have the trifecta triangle (these three things) in place.

First, is your offer. You need a strong offer that commands attention and solicits an answer. I like to use the following formula. “Would you like to get X without having to do Y?” X = What they want. Y= What they don’t want. This formula is simple and super powerful. For example, in real estate, we run ads that say “Would you like to be the first to know when new houses hit the market without getting bombarded with emails every day?” The simpler the better.

This formula is important because it asks. When your ad asks a question it demands an answer. It’s human nature. They have to answer it. This is how you get the attention and get them to qualify themselves. Some people want it. Some don’t. Everyone who sees it makes the decision. Also, your picture, video, image, or whatever you share visually is part of the offer. Make sure it matches the words in the ad.

Second, you need an audience. The right audience/offer combo is the ONLY way you will make money from FB ads. You can have the greatest offer in the world, but if you put it in front of the wrong audience, you won’t sell a thing. The offer is the first step. Now, we have to choose who the right person for the offer is. That’s where the targeting comes into play.

I like to keep my audiences limited to 100,000 people or less when I’m spending $100 per day, per ad. If you spend $100 and you have the right targeted audience, you will reach them. For my real estate company, I run local ads. For my sales training and seminar companies, I run ads all over the world. You need to decide who will take you up on your offer, then target those folks with the offer to be sure.

In my experience, it’s best to keep hitting the same audience over and over. Familiarity goes a long way. You’d do better to tweak your offer in front of the same audience than you would to find new audiences. Also, FB will optimize your audience for who is most likely to click but it takes a few days of data to do so.

Third, you need a funnel that converts. If you have an awesome offer, the perfect audience and a broken funnel, you won’t make money. I like to make an offer that goes to a landing page that collects their first name, email address and mobile phone number. The mobile phone number is so I can text them.

Basically, I make a post and boost the post. That post has a call to action to click a link to my landing page. On my landing page, the offer is reinforced and hammered harder. When they opt in, they get what was offered. While on the thank you page, the call to action is “Like us on Facebook” with a button linked directly to my page. I drop them off where they started, back on Facebook.

With these three parts, that I call “the triangle trifecta” you can easily run ads that convert.

If you have a simple, clear offer, you will convert. People scroll Facebook quickly, so your ad needs to stand out. Ask them a simple question they can answer to make a decision.

I run 3-5 ads at once. Plus, I post 3-5 times a day organically on my fan pages. I’m producing a ton of content to drive traffic, eyes and organic exposure to my offers and ads as well. That’s what’s great about FB ads. You can get “free” exposure, too, if the ad is good.

After each of the ads has been running for three days, I shut down or tweak the weaker ads. The ones who cost more per click, get less exposure or don’t convert, get tweaked or cut. Every day I log in to FB, check my ads, see which ones are performing and turn them up. The ones that are not performing, I turn off. It’s a daily thing for me.

Running Facebook ads doesn’t have to be complicated. Even when it comes to retargeting. I added the pixel to my blog and I retarget anyone who’s visited with my free book offer www.elevatortothetop.com. This is the key. I drive them to my blog from FB, build a list then retarget that list with my F+S (free + shipping) offer on my book.

I’ve used this system to sell luxury homes in Austin, Texas, $30,000/year consulting packages, seminars, alarms, CrossFit memberships, and more. It works across the board, so you can’t knock it. I’ve created over 1,500 FB ad campaigns. I don’t know too many people with that kind of experience.

Now, if you’re thinking about hiring someone to run your FB ads, think again. It’s way easier than you think. You see nobodies running ads every day offering to help you. If they can do it, you can. You don’t need their help. You can do this stuff all by yourself in about 10 mins per day.

I have a mastermind where we discuss FB ads, YT ads, networking and more, called Break Free Academy Entourage. One of the members has used my FB ads system to close over a billion dollars in mortgages. Plenty have scaled their ads to earn six figures in less than a month. You can join us, speak with me and them, then run your own ads, save the cash and scale your biz to a million dollars if you’re willing to do the work. Join us at www.breakfreeacademy.com/entourage 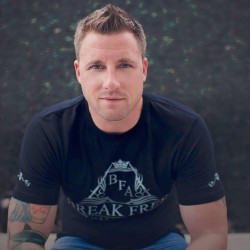 Ryan Stewman
My site, HardcoreCloser.com is an online learning resource for salespeople. We sell e-learning products in the advertising, marketing, funnel, sales and social media arenas, as well as do personal coaching and live events.

Latest posts by Ryan Stewman (see all)
No tags for this post.

Anti-Bullying and Martial Arts Franchise, Warrior Island, Announces the Airing of Season 2 of Saga 1 of The Warrior Island TV Show and The Release of The Comic Book Issue #8